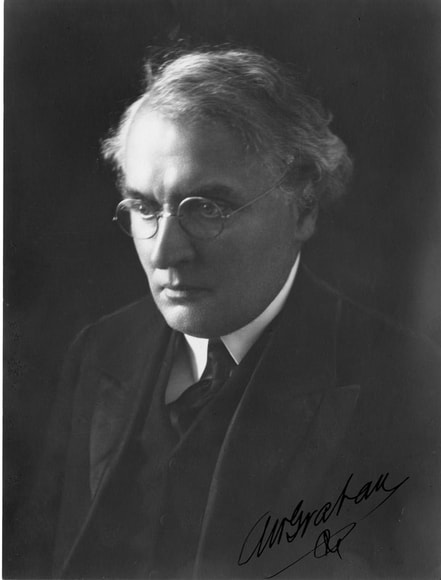 From 1909 to 1918, Marjorie O'Connell carried on a romantic relationship with Dr. Amadeus Grabau, Professor of Geology at Columbia University.  The "affair" began when she was an undergraduate and continued throughout her graduate studies and for two more years.  He kept promising to divorce his estranged wife -- the writer Mary Antin -- and  marry Marjorie when she finished her doctorate.  In 1918, she caught him lying about having been to visit his estranged wife.  She felt she could not forgive him for the lie, and for continuing to put off his divorce, and broke off the relationship.  In her later years, she wrote poignantly about her great love for her "scientist" and her regret that she did not marry him and go to China with him.  Apparently, the only written record of this relationship is in these letters, written many years later, and discovered after her death in two suitcases in her house, along with her letters to Barnum Brown in 1920, and other writings.  In her 1920 letters to Barnum Brown, she makes several references to how much Brown had helped her after the crisis she experienced (the breakup with Dr. Grabau), but she is always careful never to mention Grabau by name.  Photo above courtesy of the Smithsonian Institution, used with permission.
In 2004, Allan Mazur published a biography of Amadeus Grabau (see cover photo below).  I read it, and finding that it contained no inkling of Grabau's affair with one of his students, I wrote to the author.  Dr. Mazur had no idea that Grabau had carried on with Marjorie O'Connell for almost 10 years, from 1909 to 1918, while married to Mary Antin.  Dr. Mazur is skeptical of Marjorie's claims that she was first offered the position in Peking, China and turned it down, recommending Grabau instead.  We will never know.
In 2018, Peking/Beijing University published an essay online recognizing Dr. Grabau's contributions to Chinese geology and paleontology.       http://newsen.pku.edu.cn/news_events/news/people/7071.htm        Click on this link, or on the file below.

Download File
Cover photo of: A Romance in Natural History: The Lives and Works of Amadeus Grabau and Mary Antin, by Allan Mazur, Garrett Publishing.
Excerpt of a letter written January 15, 1961 from Marjorie O'Connell Shearon to Dr. Rufus B. Robins of Camden, Arkansas.  Friends for many years, they began an affair after Marjorie's husband "B" died in August of 1960.  In a recent conversation, Dr. Robins had told Marjorie about an affair he was carrying on with a woman named Edna (his wife was in an asylum) and Marjorie is rethinking her role in his life.

The rest of the letter contained more of the usual topics found in her letters to him – financial problems, love life advice, how much she loves him, etc.